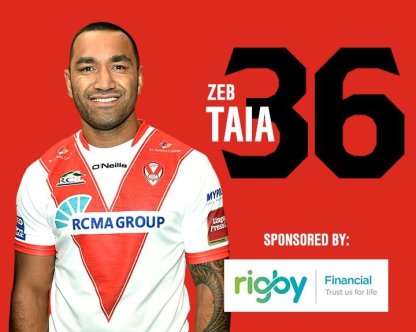 Born in Auburn, New South Wales,Taia played his junior football for the Enfield Federals and the St Clair Comets before being signed by the Parramatta Eels. He played for the Eels' Premier League reserve-grade team in 2006. In Round 5 of the 2006 NRL season he made his NRL debut for the Eels against the Penrith Panthers.

In 2007, Taia was granted are lease from his Eels contract and moved mid-season to the Newcastle Knights. In 2008, Taia established himself as a permanent first-grader with the Knights.

Taia playing for the Knights in 2009

In the first week of thefinals series of 2011, Taia made a comeback from a career threatening neck injury in which he suffered four rounds into the season.

On 16 May 2012, Taia signed a3-year deal with French Super League club, Catalans Dragons starting in 2013. Taia said about the move, "Whilst my wife and I are looking forward to experiencing life in another country, a beautiful one at that, I am forever indebted to the Knights. Not just for the time I have been here but the support they showed me, particularly last season during a potentially career ending injury.”

On 5 August 2015, Taia signed a 2-year contract with the Gold Coast Titans to return to the National Rugby League after three years in France, starting in 2016.